After a two hour drive on an eerily empty auto-route, we arrived in Nice......well the road was virtually empty in one direction anyway, everyone seemed to by doing their best to get as far away from Nice as possible whereas we were intent on getting there! 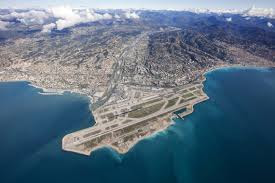 Contrary to the usual French efficiency and excellence of their roads, we encountered a big problem when it came to actually finding a way into the airport.

A new road layout was begun late last year and even by this time it is still not completed. As you come off the 8 lane motorway you suddenly find yourself almost in the centre of Nice, and in a grand canyon of high rise apartments blocks, but which way to go?


We knew the airport was somewhere on our right but exactly which road would take us there was anyone's guess! If we had been crows we could have hit the terminal in less than 10 minutes, if only it where that easy!

In true Irish fashion we choose the wrong lane and ended up on a magical mystery tour of the port area, and very nice in Nice it was too. The Mediterranean sea was blue, the sun was shining, Mercedes and Ferraris lined the quays, and the super yachts were bobbing in the bay of Cannes, but there was no where to do a u-turn!
After cruising the bay area we eventually made our way back letting the palm trees guide us and lo and behold there were signposts leading us right into the airport, we were saved and still on time!
By now it was lunch time and since it had been 5 hours since breakfast we were starving, stress also has a habit of increasing the appetite!
CLICK TO READ MORE >>