The Chaos Of Interpersonal Relationships


Good evening Bunkerers (or whatever time of day it so happens to be when you read this).
A little while ago (last August to be exact) we got rather excited about small scale fantasy armies. 750 pts, no units bigger than 20 (unless you are a Goblin or Skaven Slave), No Lords (looking at the Goblins again), the army must be at least 3 units + characters. I can't remember if there was any other restrictions we had decided on (anyone else remember?). Anyway, we had a lot of fun with these little armies and I got the notion in my head to use these rules to build a Chaos warband. There might have been some vague discussions about all of us doing something similar or that might have just been in my head and I was planning on talking about that (this sort of thing happens a lot). In true Maisey fashion I got rather over excited and read the chaos book from cover to cover (or at least looked at the pictures) and worked out what units I wanted in my warband. Then I went out a purchased a bunch of boxes and excitedly stuck them together. Then the butterfly wafted through the room and I went off and did something else (tanks might have been involved). In the meantime these Chaos models sat on the shelf doing nothing but pour guilt into my soul.
A few months back Em and I were having a bit of a spring clean and when we got to this little band of models there was a brief discussion about what to do with them. Do we offer them up to the gods of ebay? Do leave them where they are? Do I actually get on and finish the damn things? Well, the final solution was that she would adopt them into her ever growing Chaos hoard (she's up to 5k, seriously?!?). There was a catch, and catch was that I finish painting the warriors (wait, how does that work?). So I did, and here are the results.
First up is a few Khornate warriors for maximum killydeathsmash. 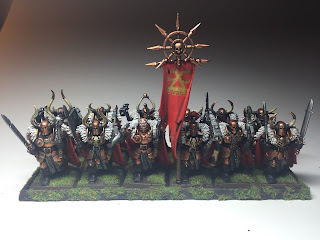 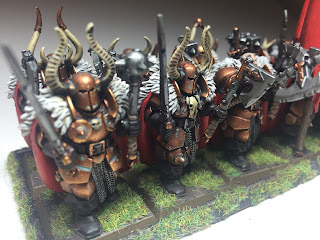 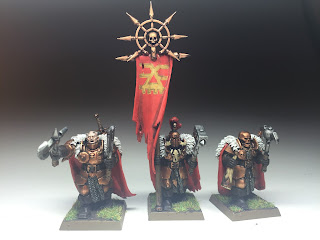 One of the other units that got absorbed was a trio of trolls (that was fun to say, in my head). I ended up painting these pretty early on, they just needed some finishing, they were fun to throw the airbrush at. 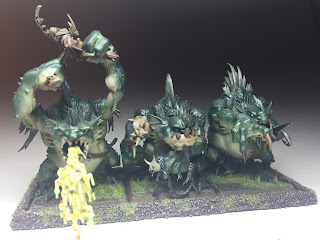 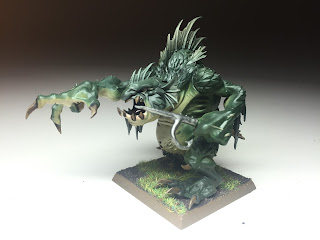 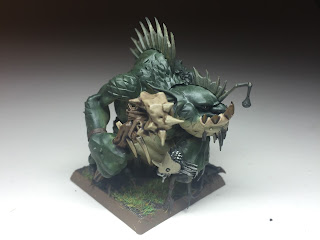 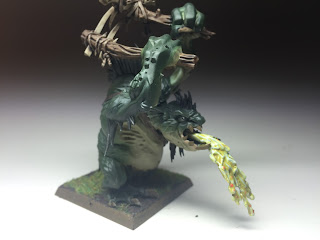 The next unit was little block of converted Marauders. As I cannot be in the same room as the standard Marauder models without wanting to beat the sculptor around the head with an anatomy textbook I had to find an alternative. I started with Empire Flagellants and added some stolen Chaos weapons, shields, and the odd head.  In my head, the concept for the warband was a core of actual Chaos Warriors followed around by some nutty cultists. The Flagellant models fitted perfectly and didn't take a great deal of effort to kitbash into something half decent. Anyway, these I didn't paint, but Em bashed through them in a few days and gave them a far better paint job than I was either planning or able to. 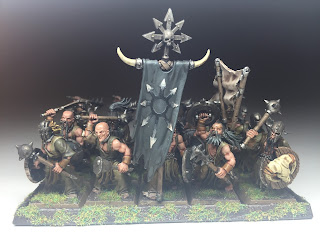 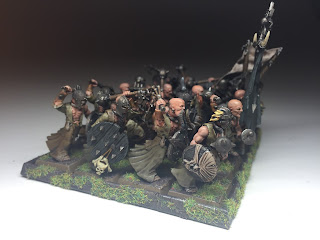 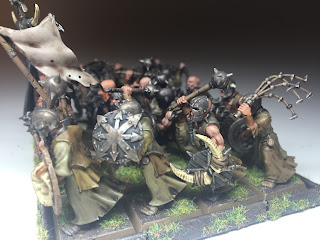 There was a fourth unit in the warband, some Marauder horsemen (which are far better sculpted). However, I'm going to leave them for Em to post. She's keeps talking about doing a post focusing on Ponies. When it comes to painting horses Em is by far the better of us (what, I can't just dry brush them brown and be done with it?) and her horses are something beautiful to behold. So I'll let her talk about them in detail next time.
ThanksMaisey