The Future Of The Company - Blood Angels

Today we look at two individuals upon whose transhuman shoulders rest the very future of the Blood Angels, especially the 3rd Company. Lets start with the one with arguably the biggest job. Sergeant at Arms Radueriel. 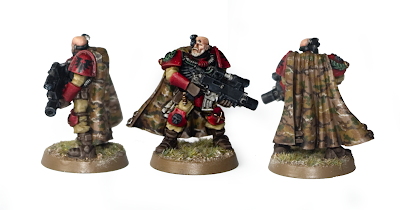 The eagle-eyed among you will be saying "now Jeff, you can't fool us, that's not Radueriel, that's Telion..." and you would be right. It has long infuriated us that only the Ultramarines get a character scout to lead a reconnaisance army. It's daft. There should always have been an option to put a character in scout armour and indeed in an older Space Marine codex Telion was considered an archetype and you were supposed to rename him and use him in your successor chapter. Well. I'm taking that one step further and changing him to a Blood Angel. I'm swopping out his Chapter Tactics and calling it good. 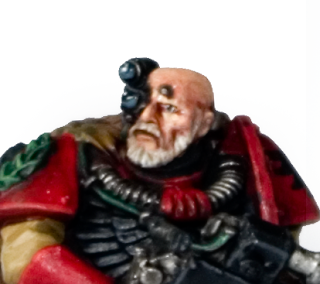 Uniquely among my scouts, Raduriel has his face on display, partially to help him stand out, mostly because I just love that sculpt. He looks so perfect as the aging mentor. I used the old (badum tish) trick of using light grey as the final highlight on the skin rather than something more bone-toned which makes the skin automatically look older. The beard was an experiment that worked wonderfully with baneblade brown as a basecoat with grey highlights. Gives an impression of the former colour under all the grey hairs. I see him as a fearless leader and mentor. His progenoid organs long matured and removed, his genetic heritage already serving in the chapter. 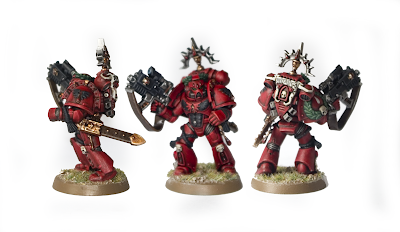 At the other end of the spectrum, while Raduriel is ensuring that much needed aspirants become Space Marines; Lt Thekla Antergo is ensuring that the 3rd Company has a smooth transition of leadership planned. In the Blood Angels, Lieutenants are paired in each company, one is the Sword of Sanguinius and is there to inspire heroism. The other is the Warden of the Blood and is the annointed successor to the current Captain, there to provide solid leadership and council. With the 3rd Company being a traditional tactical company and the last two Captains having come from the 1st Tactical, Antargo has been raised up from the Sternguard. The passing of Tycho left a long shadow on the Company and the reforms that have brought Lieutenants have met with much relief for the Blood Angels.

Speaking of the passing of Tycho, I came up with another bit of headcanon while painting Antargo. Those cords tied around the legs and arms of some Blood Angels, what might they be? I figure that they are mourning cords in rememberance of a brother fallen to the Black Rage. Space Marines are supposed to fight and only in death does duty end. The Black Rage is not death. It is not honour and bravery, it is insanity and delerium. That is an end to mourn. Just another page in the big ol' book of Blood Angel Angst.

The Blood Angel fever still seems to be upon me so there will certainly be more soon, not least our other Lieutenant, the Sword of Sanguinius, Tryfon Salinov. But until then